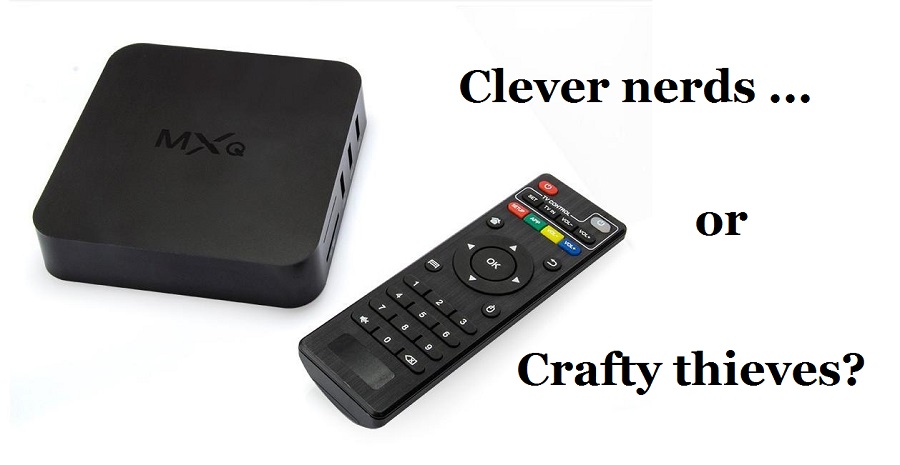 A bunch of nerds came up with some coding that developed into the Kodi box (formerly the Xbox Media Center)– which is a media centre box that the viewing public took to quickly.

The box comes pre-loaded with films and boxed sets and lets the purchaser watch live TV, even from channels that normally require a subscription.

This creates a copyright issue.  At a push, if you own the DVD of the film or boxed set you’re watching then you don’t have a problem.  If you don’t own that programme then, technically, it’s an infringement of copyright.  You haven’t paid for that specific film or programme – and neither has anyone else – it’s unlicensed.  That means that the film makers are not getting the royalties due to them.

Whatever your view about who gets paid what and whether it’s a fair amount for what they do – it’s breaking the law to watch films and other programmes without the proper permissions.

When it comes to watching premium channels that would normally be part of a paid subscription without the Channel receiving any recompense from the watcher or the Kodi box manufacturers or sellers, that becomes theft.

There’s currently a legal case being brought against the developers.  As this is open source software, potentially owners of Kodi boxes may suddenly find that the service behind the box suddenly disappears.

Watch the court case against the lead developer and don’t buy a Kodi box just yet.  If you’re keen to access a similar service there are other options, including Amazon’s Fire stick and Google ChromeCast.