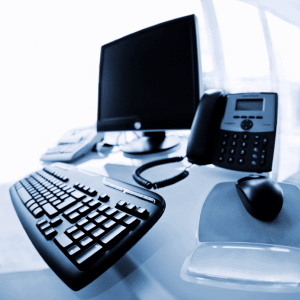 Technology advances mean that what may appear to be a landline – isn’t.

Voice over Internet Provider (VoIP) has been around for quite a long time and many people use Skype regularly and other similar services, like Vonage.  The most common usage is for people who are both signed up to be able to talk to each other via a mic and sound card on their computers.  You can also dial phones from Skype paying a cost per minute and can even get a Skype phone with a real number than you can plug into your computer with a USB connection.

So is this what VoIP means?

Well, it’s one meaning, but the problem with Skype and similar services is that the router isn’t set up to give voice traffic priority, so if email is coming and going, you’re running other internet sites and other operations, your voice connection can be a bit dodgy and prone to kicking you out from time to time.

It also requires your computer to be on all the time in order to use it.  With several people in an office transferring calls from one to the other is somewhat clunky too.

However, today’s VoIP systems are more sophisticated and don’t rely on a computer being on as the phone system has its own dedicated IP address with voice traffic as the number one priority.  The hosted system is usually in the Cloud and operates seamlessly, just like a telephone system that uses the old copper line system.

If there’s an onsite PBX for the VoIP system that does need to be on, but otherwise the system behaves in the same way as the ones we’re more familiar with.  It can transfer calls between phones, put people on hold, have conference calls, and include speed dial lists.  But, better than an old landline system – it can also integrate with your IT system and provide caller records and information as you answer incoming calls.

If this sounds like something that will add value to your business system – just give us a call, we’re always happy to answer questions.