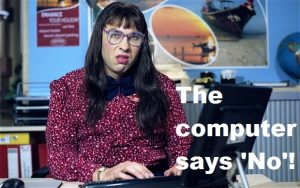 We’ve written plenty of blogs about the importance of technology to your business – and how painful it can be when things don’t work, but, so far, we’ve focused on what happens when the broadband fails and all communication comes to a halt.

Sometimes the problem is less obvious – there’s more of a gradual slowing down rather than abrupt halt – and that’s usually due to your hardware getting tired and working less effectively.

Most computers start to slow down a bit after a few years and, if you’re using the same computer day after day, it may not be noticed for a while.  A good quality computer should be OK for about 5 years and then the programmes that it’s running are probably starting to exceed its capability.

Remember that whilst your computer doesn’t change, the software you’re using is being updated, you’re adding new programmes and upgrading your operating systems.  There will come a point where the computer just can’t cope and starts taking its time over everything you ask it to do.

Yes, of course more memory can be added, but it isn’t always the solution.  Sometimes it’s just not up to the job.  It’s a bit like putting a high performance V8 engine with a turbocharger into an old mini.  The chassis will limit the engines ability to perform at its best!

Keep an eye on your hardware and make sure that your staff are not wasting hours sitting waiting for their computer to catch up with their work rate.  It’s often much more cost effective to get a new computer than to lose working time with slow equipment.

When you’re purchasing new computing equipment it’s wise to consider the use it will be put to.  If the computer is for office use it’s best to buy a PC rather than a laptop.  The PC has two moving parts – the fan and the hard drive.  If one fails it can be replaced.  If a laptop fails, it’s usually only fixable with a new laptop!

Of course, if people need to be mobile then a laptop makes sense, but ideally, it should be used only when on the move, not as an everyday workhorse.  If you have your data storage set up properly it should be accessible for anyone from anywhere (providing they have the right access codes), from laptop or PC.

Think before you buy

It’s always tempting when the local computer store has a great offer going, but before rushing out and buying a computer from your retail park, think carefully and ask the right questions.

Find out what operating system it’s using?  If it’s anything that has the word ‘home’ or the word ‘student’ in it, it probably won’t cope with business usage – and won’t be compatible with anything else in your office.

Check what application suite is installed – the same applies, if it’s a home edition, it won’t work with any of your existing software.  You don’t want documents creating that can’t be opened properly by anyone else in your office.

For our customers updating their hardware is part of the discussion we have about their IT roadmap.  Make sure your IT company does this for you too.