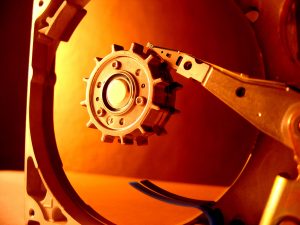 There’s often confusion over the difference between a bit and a byte in computer-speak so here’s the explanation.

Bits are usually part of the calculation relating to the speed of uploading or downloading information so you hear about ‘X bits per second’.  Now that broadband is getting faster and faster this tends to be ‘Megabits per second’.  This is usually written as Mb.

Bytes are generally what is referred to when referring to the capacity of a hard drive, so you’ll see that a hard drive can store 64 megabytes (written as MB, just to confuse things).

So what has a bit got to do with a byte?  That’s even easier:

So it all seems really simple – until you start multiplying upwards.

For those people who understand decimals it would seem logical that 1 Kilobyte (KB) is actually 1000 bytes, but it isn’t.  It’s actually 1024 bytes.  This is because the calculation is based on binary code, not a decimal system.

When you consider that a decade or so back a desktop computer only had a memory of 64KB – most documents are larger than that today!

Your computer has two kinds of memory – one that makes everything that the computer is doing right now work – so your email, documents, etc.  This kind of memory is known as Random Access Memory or RAM and is only in use whilst the application is actually working.

The other kind of memory is the storage, what we call the hard drive, and is gradually filled up with documents and files.  If you use a cloud-based storage system such as Dropbox, you are still using your hard drive as there is a copy of everything locally.

So next time someone starts talking about megabits and megabytes you’ll know what they’re on about!